Cat in a box

This is Lumi, the family’s cat. We found her several months ago below a balkony in the neighbourhood, crying and hungry. She is the most curious thing one can imagine… on this photo she is sitting inside the just-finished soft-box I made on saturday night. But I’ll start at the beginning. 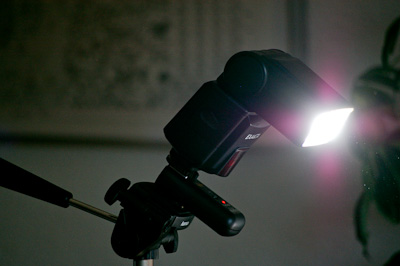 On friday the package from Hong-Kong arrived, containing the YongNuo RF-602 radio-trigger and receiver for hot shoe flashes. First thing after inserting the batteries (coming inside the box – nice service) was… nothing. The flash didn’t fire. I was beginning to get disillusioned, thinking my flash might be too exotic (it’s an Exacta flash that cost me 99 Euros) and might not  be designed for this flashy strobist stuff… well.

The radio trigger was obviously working, the LEDs both turned green when releasing the camera-shutter or pressing the remote button on the trigger thingy. Desperation was spreading in me, I gave the flash a last press to see if maybe it was not totally in the receiver’s hot shoe… and that was exactly the problem. The flash had not been totally inside. Now it was working. And I was already thinking that getting the Nikon version (and not Canon, which claims to be working with Pentax cameras, as I read after ordering) was a bad idea…

After several hours of testing there was a problem that was occurring almost constantly: The flash was firing from alone, but sometimes not firing when it should have done. I suspected one of the contacts in the camera hot shoe was sending an occasional signal that was interpreted wrongly by the receiver… and started to cover one contact with tape… the first try already did the trick, I taped the  „digital“ pin (see image here).

Since then I didn’t have a single missed flash, and no unwanted flashing either. Everything is only working with manual flash settings, but I am fine with that.After few days I am already getting a feeling for the settings for correct flash and camera exposure. I love the new possibilities that open already with one simple strobe independent from the camera. 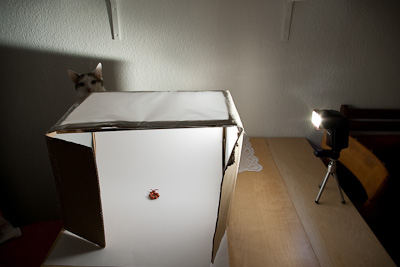 On saturday night I built a simple „mini-studio“ out of a carton box, following an idea on the strobist blog. For the sides I used transparent paper from a roll (good to have an architect in the family!). The flash is just positioned outside the box and gives a nice soft light inside. A great solution for quick product or detail shots. And Lumi gave her okay as well, after inspecting the box inside out.

This is an example for a photo from inside the box: 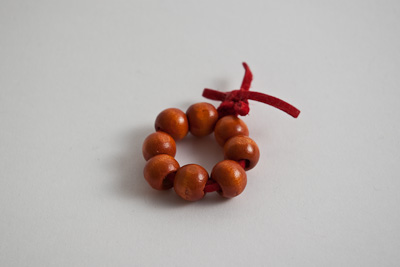 Nice even light, perfect for little thingies like the little wood-pearl ring my wife made. Or cats, if they want…