It happended… I have been treating my good old Pentax K100D like a raw egg ever since I bought it… last week now it fell down from the tripod, the fast lock didn’t close properly.

The camera looks unharmed from outside, except a little ditch on one corner. But… the exposure meter went crazy. It doesn’s measure correctly anymore, always proposing 1/4000 of a second even in the darkes rooms… unusable!

So now I’m set back to the old days, with nothing left but totally manual exposure. Luckily nothing else broke, but it is very frustrating… repairment or even a new camera are not an option at the moment, sadly. At least nothing else seems harmed, the photos still look sharp and without errors, focussing works as it should.

That said, I have not been dead during the last month. Only had a week with a bad flu and then a lot of work to do… preparing an etsy store together with my wife Vanessa to sell our art and handicrafted goods.

Well back to more pleasing photography topics: Last night the world celebrated the “Earth Hour” – between 8.30 and 9.30 pm people and institutions all over the globe switched off their lights to set a sign against energy waste and climate destruction. You can see photos here and here.

I thought that would be a good opportunity to experiment with candlelight… the crazy (“strobist”) way. I build a setup with six candles to take a “portrait” of a little stone couple we have in our bedroom. 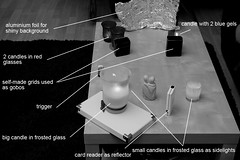 In the background I put some aluminium foil – my latest find for backdrops with nice shiny out-of-focus light circles. It was lit and colored by a pair of candles in red glasses and another candle with two blue gels (to add at least some “real strobism”).

The statue was lighted by a big candle in a frosted glass that worked as a light diffuser, and sidelighted by two smaller candles in frosted glasses. Everything was shot on a tripod of course, to hold the necessary shutter speed of one second for the dark light. (See setup shot to the left, click for a better view and readable infos.)

A pleasing result, and very interesting to work with so many light sources instead of my two flashes (plus sunlight, occasionally).