From idea to finish: Grass in the wind

A good image does not always present itself immediately. On the contrary, often enough it is the result of approaching a subject that seems to have some interest, trying different angles and crops and finishing the image in post-processing. In this series I want to show my thought-process from the first glimpse to the final image. I don’t plan to publish articles in this series on a regular schedule, but when I have a bunch of photos that are good examples of this process I will discuss it here. 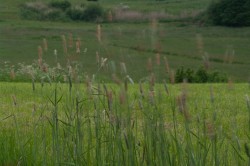 When I was out on a photo walk through a nearby forest and the surrounding fields I saw this grass growing between the way and a field with cut grass. The light breeze made some of the stalks move, while some stronger ones remained relatively steady.

The first try can be called nothing more than a snap-shot. Initially, I was taking photos of the scene behind it. The focal lenght (95mm) and the high aperture value (f22) don’t concentrate the eye on what matters: the grass moving in the wind.  The high aperture value was needed to make the movement visible with 2 seconds of exposure time (at ISO 100). 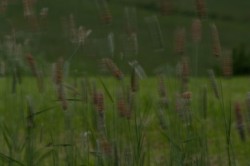 The first obvious improvement to make was getting closer.  Keeping the tripod on the same place I zoomed all the way in to 200mm, concentrating the eye more to the grass. Being closer, I could chose a shorter shutter speed to show movement.

But still there are several things wrong here: I chose a 1 second exposure. In situations like this it is a matter of trying until the balance between movement and sharpness. Here 1 second is too long. Everything is moving, which is not what I had envisioned. The aperture value of f18 is still too high, leaving the image too dark and  the background too sharp at the same time.

Another thing: Even if I am closer to the grass, I am not close enough. There is too much going on in the lower part of the image, distracting the eye from the moving heads I wanted to show. 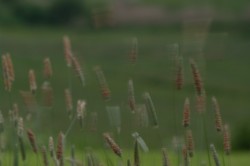 To find my final crop I moved the tripod a bit closer and lower, thus having the darker part of the field as a background for the brighter grass. This one is getting quite close to what I wanted. The focus is on the moving grass.

Still – it could be better: I opened the aperture (f10) to blur the background more, but still it is quite present. At 0.3 seconds the exposure is a bit too dark.  The other “issue” is that there is too much grass in movement – even if I like how that movement is captured, I miss something to rest the eye. 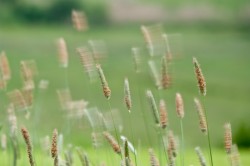 This is what I came up with in the end. I opened the aperture to f8, while keeping the exposure time at 0.3 seconds, and waited for a moment with less wind. The grass in the foreground is almost still, while there is movement going on in the back. The image shows dynamics. Plus, the field in the background is reasonably out of focus. I am quite happy with the image. 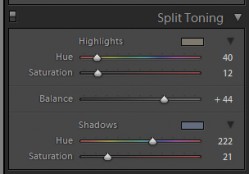 When watching it on the computer I liked the subtle green colors, but wanted to concentrate more on the movement and contrast of dark and bright areas going on here. In Lightroom I converted the photo to black and white and increased both Exposure and Blacks quite a lot to pronounce highlights and shadows. Watching the image in color now would be eye-blinding (I tried). But in black&white it is just right for me. I added a sublte split toning with yellowish highlights and blueish shadows to increase the contrast a bit more, using the settings seen at the left.

The result is the image seen at the top of this post.

While I am discussing here in quite a detailed form what led me to the final result, these are mostly thoughts that came while watching the images and analyzing why I liked the last one more than the others. When I am outside shooting my thoughts are more like “Nah.” or “Hm, quite nice. Let’s try another one.” (or the German equivalents). It is more about feeling, and for me it was interesting to see why I felt about the photos the way I did.