What to do if she sews beautiful cotton bags and he loves taking photos? He is taking photos of her lovely bags, that’s what we do!

To present Vanessa’s bags on the online handmade market etsy.com she wanted photos that show the bags as good as possible and at the same time tell a bit more about Vanessa and her personality. We love being in the local forest, and so that’s where we took the bags one nice morning. 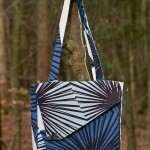 Our first location was a small broken trunk. The sun was behind thin clouds, which gave nice soft light. I added a flash from the camera right side, slightly behind the bag. That gave the outline for the bag, to seperate it from the background. A long lens (200mm) and a relatively wide open aperture (I used f5.6) help as well to make the background less obtrusive, while keeping recognizable.

We used the same setting and light setup for the white and green purse as well. I love how the colors combine with the early-spring forest surrounding. 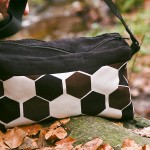 We moved on, going deeper into the forest, to a small stream. A mossy stone with some dry autumn leaves provided the perfect place for Van’s brown/white box shaped purse. The main light is again the slightly covered sun, flash on a very low setting was added to fill in the shadows.

The next model was my favorite bag, which was sold to Cyprus just today. I love it mostly because of the combination of the vivid colors and the patterns.

We used the small stream as a background to add some „magic“ with the shiny water. The bag itself is lightened by the sun from behind, the flash filled in the shadow side from the camera left side. The slight sidelight also stresses the texture and pattern of the bag. 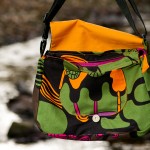 We added a view with the flip slightly open, to make the small inner bag and the magnetic button visible.

Van also wanted to show the inside of her bags. For that we moved into the house. Using the ceiling as a big light softener, I fired the flash straight up to add soft light from above into the bag.

Various lighting methods can be used to show a product at it’s best, there is no „single right“ light. Soft is usually a good choice, but for patterns and textures some harder light might work as well. When using flash, be careful not to make it too obvious. That means using it on a lower level than the ambient light by manually controlling the power of the flash (if your camera/flash allows it).

For lighting smaller things like jewelry, one possible solution could be a minimalistic self-made macro studio, which I wrote about in an earlier post. Here I wrote about another method of lighting jewelry with off-camera flash.

Here are some results from the „bag shoot“: