There are times when you get surprised by your surroundings. Such was the case when Vanessa and me where on one of our spontaneous trips to go „somewhere“ lately. We ended in a beautiful natural area just some 30 minutes north from here.

Since long we wanted to go to the lake Treßsee, which is giving birth to one of the three big rivers in northern Schleswig-Holstein, the Treene (the other two are Sorge and Eider, Schleswig-Holsteins longest river).

View Treßsee in a larger map

It was already evening when we arrived, but still some time until the sun would set. We wanted to see the lake, so we went straight in it’s direction, until these fellows changed our plan: 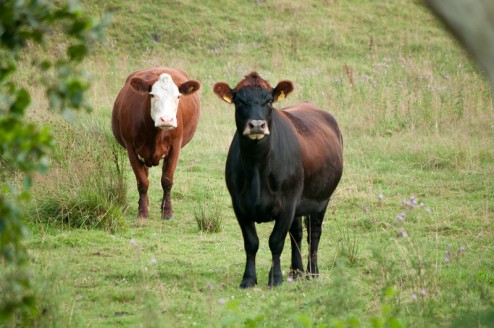 With their looks they didn’t really win our trust, even less as they had a little calf in their group. These cows live relatively freely in a big area, which is surrounded by a fence. It is allowed and possible to pass, but on your own responsibility, as they state on the signs. So, we were heading to some hills instead to get a better view.

The view was really good, we could see the whole valley of the lake (but not the lake itself), and were surrounded by some beautiful flowers.

As we were sitting on the little bench on top of one of the hills (Van) or crawling through the grass around that bench (me) we got a visitor. A small deer (roe, German Reh) was munching it’s path through the fields, until it was less than 10 meters away from us. I barely dared to take photos of it, not to scare it with the shutter sound. It noticed us, watched at us and continued, until eventually it got suspicious and got further away from us again. 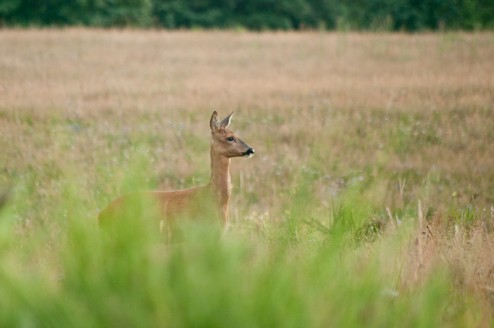 Those are the moments I love when being out in the nature.

And it kept getting better: The eastern sky was filled with dark clouds, while the low sun appeared between the clouds in the west, painting the hills in beautiful dramatic light, and even a rainbow appeared.

The next highlight was the insect life in the high grass. We found a wonderful blue butterfly, which was posing as a model for minutes, we already feared it was dead until it flew away. 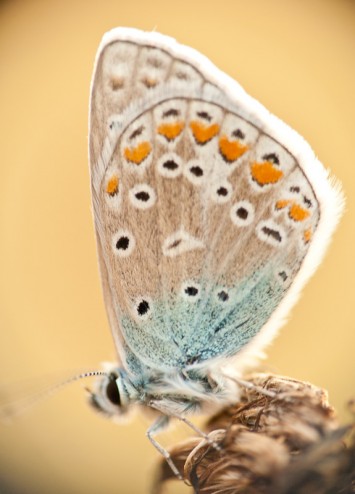 Grasshoppers and damselflies were around as well and stayed calm long enough to be captured.

Now the sun was about to set, which led to some moody photos in beautiful purple-ish colors. We could watch a second deer from the top of a higher hill, or maybe it was the same one? It would have had to surround us then, though. 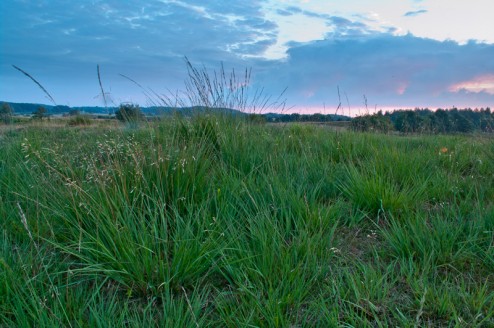 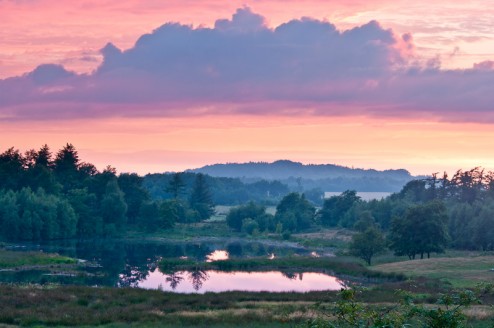 This is not the Treßsee, by the way, but a smaller one beside. We never got to see the Treßsee, though… this one offered some spectacular reflections:

After surrounding the whole are by car we could take a last look from the same point where
I had taken the panorama on top just some hours ago. What a dramatic difference! 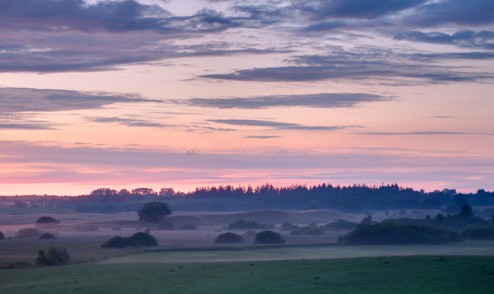 A place we will visit many more times, I’m sure! We will already try this weekend – last Saturday I saw the hills from far, and they were shining in purple, covered by heath plants.