The photo above shows the St.-Peter’s cathedral here in Schleswig. During Christmas time and on church holidays it is illuminated beautifully by strong lights, seen from far over the Schlei inlet and even from the highway to Denmark which is passing by several kilometers away.

I was thinking of how to light stuff as well, in a smaller scale though. I am unsatisfied with how my flash photos look like (and especially in winter there is a lot of them at work). At the moment I am helping myself with a cup made of frosted transparent plastic to make the light of the flash less ugly and softer. But still it is coming from the front, flat and boring. At home I am “experimenting” with a loose self-made cable connection. Terribly shaky and unreliable, but giving me an idea of what is possible with the flash off the camera. 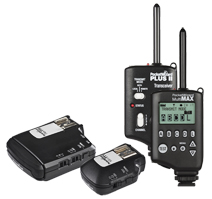 Since months I am swallowing the Strobist blog made by Dave Hobby, admiring his great results with a simple set of remote-controlled hot-shoe flashes. I’m also following the work of Joe McNally since quite a while, who also likes to use radio-controlled strobes. What kepts me away were the costs of the most praised systems, Pocket Wizards and Elinchrom, and reports about badly working China-made controllers.

A while ago I read a guest post on the german photography blog of Martin Gommel about the Yongnuo RF-602 controller/reciever package. The controller is put into the hotshoe of the camera, the reciever is connected to the flash itself. As I’ve read since then on several places it is well-crafted for a very cheap price and seems to work quite reliable, even on bigger distances (talking about 100 meters and more!).

That convinced me to try the RF-602 myself, given that the financial risk is relatively low. I ordered the set on wednesday on ebay… for not even 20 Euros including shipping costs! It is shipping from China though, so I have no idea when it will arrive here. When it does and I get my first results I will post an update and photos. 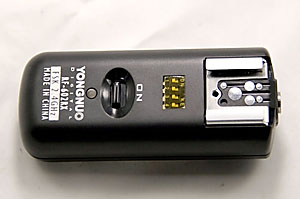 I ordered the Nikon version for my Pentax K100D by the way (there is a Canon version as well). It is supposed to work. I have read about problems with the Pentax flash sync  speed using the RF-602 though. It is 1/180 seconds, but in the Pentax and flickr forums several people were commenting that they were only able to get photos with 1/125 seconds without problems. It seems the Nikon version is less problematic. I will see. 1/125 seconds will still be okay for most uses I guess.