About one and a half months ago I met the Swedish photographer Edvard Koinberg at the Stadtmuseum Schleswig, our local history museum, which has several very good photo exhibitions every year (last year was it’s 130th anniversary by the way, which make it one of the oldest museums in Schleswig-Holstein, even in Germany). 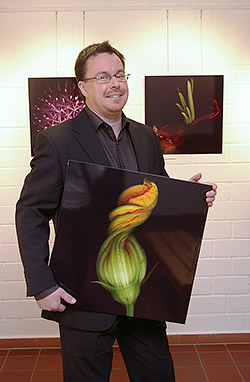 Last year they had a very successful exhibition with photos by no other than Magnum-photographer Steve McCurry, who took the hyper-famous image of an Afghan girl in 1984. I was assigned by the Schleswiger Nachrichten to cover his presentation at a local event hall, which was packed with people then. They’ve also had exhibitions of the World Wildlife Photographer of the Year winners several times.

Well, in that museum I met Edvard Koinberg (photo on the left) in a pre-opening press conference. He had come to present his exhibition Herbarium Amoris, the most shown exhibition worldwide at the moment. There are four photo sets running at the same time in different places.

Herbarium Amoris is Koinbergs modern adaptation of Carl Linnaeus studies in plants. He takes beautiful flowers – grown in his own garden – and portrays them with his camera. For that he uses a studio-setup as if he was taking the photo of a human model.

I got inspired by Koinberg’s work last weekend, when I was cutting some wilted flowers of a primrose in our living room. 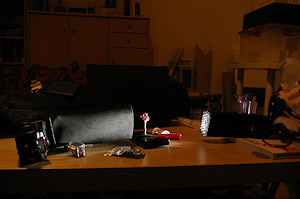 Using the comfortability of my now two remotely controllable flashes  (one with the Yongnuo-Trigger, the other one in slave mode) I built a quick setup on the living room table (like that I only had to walk two steps from where I cut the flower – it was sunday night…). The photo on the left shows the setup on the not perfectly ordered table – it was a quick setup after all.

I used the Metz flash as my main light, almost in 90 degree angle to the camera, zoomed to 85mm and in 1/128 power and fitted with a self-made gridspot (made of black straws as described in Ruy M. Leal’s DIY Lighting Mods blog). The fill light from the left is the Exacta flash with a snoot of black foam, held on the flash with a rubber band of the ones my wife uses for her hair (and our cat’s favorite toy). 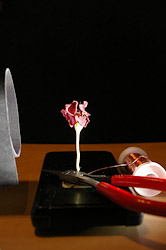 The Exacta is on 1/16 power (the minimum setting) and additionally darkened  with a 2-stop AND a 3-stop darkening gel. Both flashes are pretty close (around 20 centimeters) to the flower, which I fixed on a copper thread to be upright. It is kept in place by a pair of pliers, which only give some weight to the thread.

The background is a black foam, but it was not really needed. At 1/100 of a second and an aperture of 16 the ambient light is non-existant and the strobes did not light the background either.

The result is a pretty three-dimensional image of the wilted primrose. I will need a lot more of exercises like this to get close to the results of Edvard Koinberg, but it is a startig point that I’m quite satisfied with.

Here is the complete photo, the image on the top of this post is a crop from the same photo. 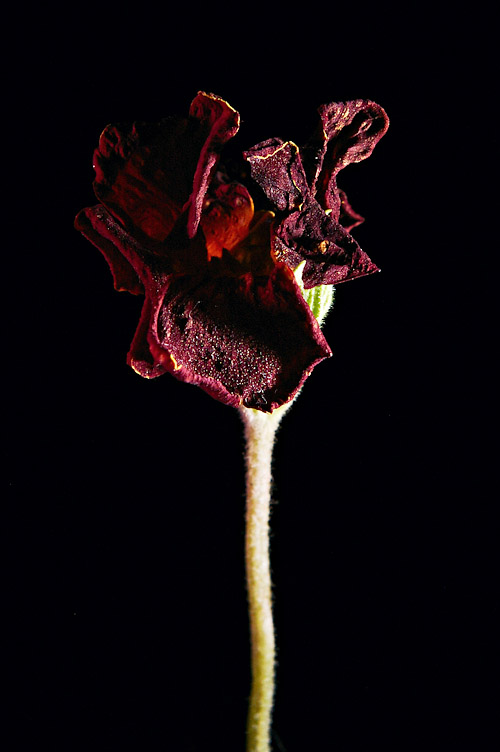