It is still winter, and even if the snow was beginning to melt last week… today we got a bit more of it again. One good use of dark winter nights (that usually follow the golden winter evenings, like the one above) is to create little additions for the (not yet existing) lighting bag. 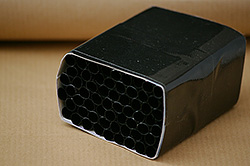 Some weeks ago I made a “grid snoot” for my Metz flash. That one is pretty easy and several places show how to make it (this is the best description I guess).

I took the next box of thin cardboard within reach, cut, bent and glued it so it would fit around the Metz’s body and then glued rows of cut black plastic straws into it. Actually, the part that took longest was to cut the dozens of 4 centimeter pieces of straws. I secured and “decorated” the whole thing with black tape and was done.

The snoot helps to let the light appear as a tight, round (because of the straw’s form) spotlight. I used an older version on this series of jewelry photos. Now both flashes have one. 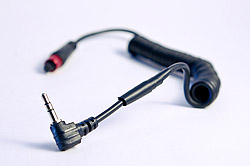 Another thing I came up with and which I first used for the HDR photo of St. Peter was to convert my Yongnuo RF-602 wireless flash trigger into a wireless camera remote shutter. That shouldn’t be necessary, because the trigger advertises this feature and brings all the neccessary cables to connect the receiver to the cameras cable release jack.

Alas, I had ordered the Version with a Nikon trigger and cables… The plug was a 3,5mm audio-kind of plug, while the Pentax K100D uses the 2,5mm-version. No problem I thought, and got a 3,5mm-to2,5mm-adapter piece. Sadly, that made the autofocus unusable (it started right when connecting the receiver and then stopped suddenly).

So I cut the second cable which came with the Yongnuo and with had a plug which I still have no idea what it might be for, cut the adapter cable as well and soldered both together. I had some experience in that from building a cable shutter release from scratch years ago.

The remote control works perfectly now. If needed and if the Yongnuo manual and many reviewers on the net don’t lie I can trigger my camera from 100 meters away now. Maybe it’s time to hunt some wild tigers…

By the way: To fire a wireless flash a second set of tigger and receiver is needed. The flash will not fire synchronous on the receiver that controls the camera. It would not be very remote from the camera itself, anyway…

The title photo was taken some on one late saturday afternoon some weeks ago, downtown Schleswig.